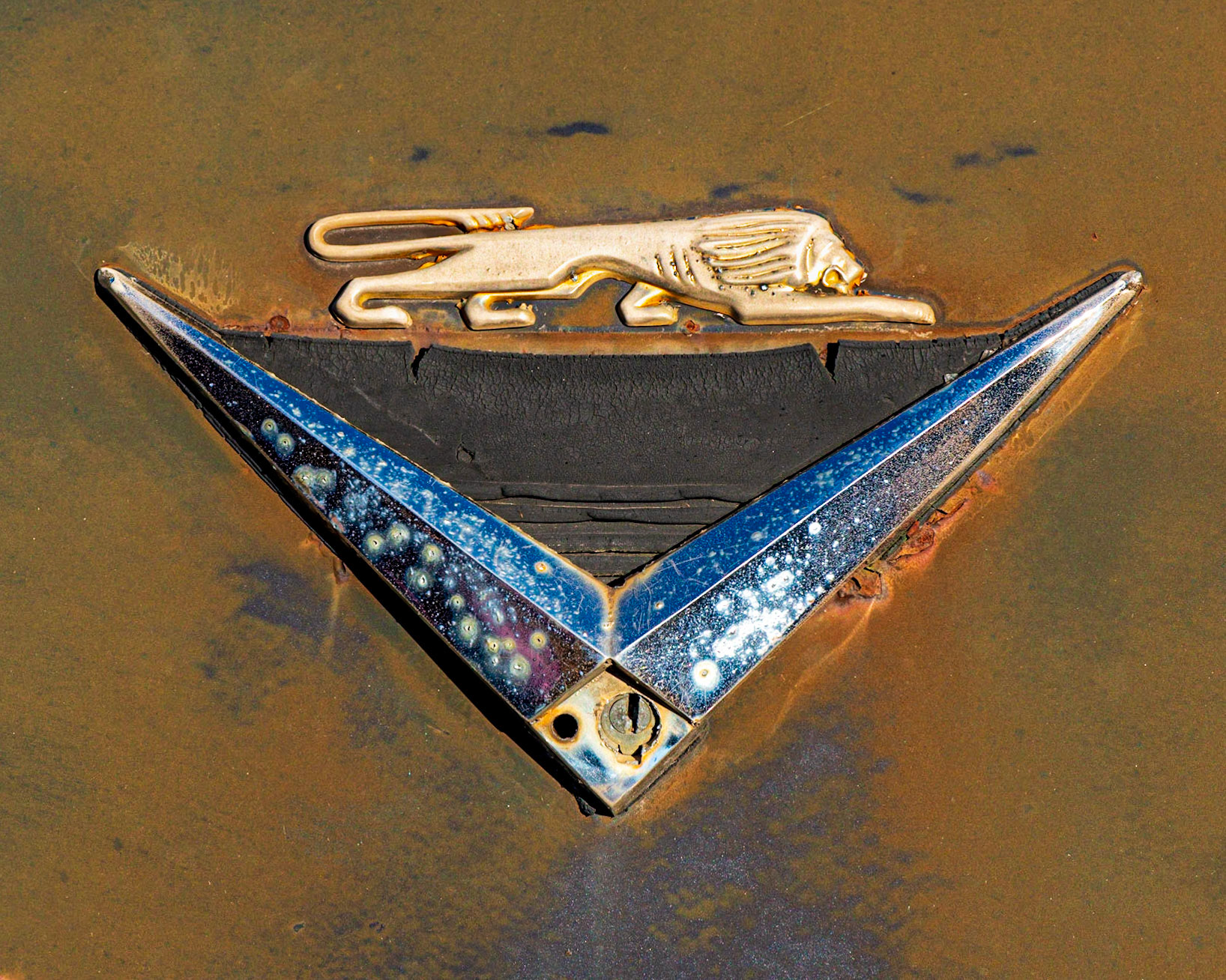 I found the blue/orange contrast in this car decal very compelling. Otherwise, it forms a strong triangular shape which I think works well centred in a rectangular frame. 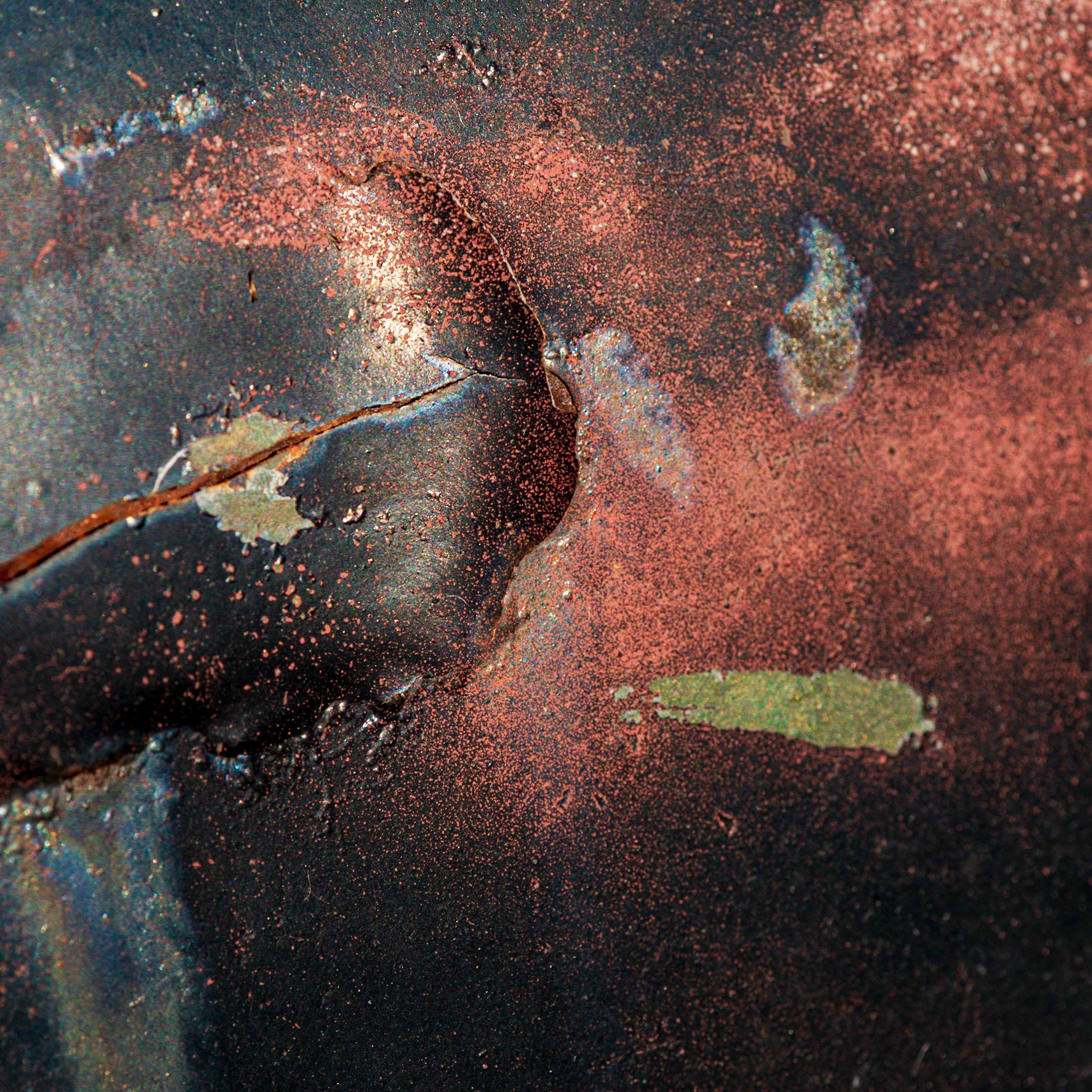 Rust, traces of paint, and blistering of metal. There’s a feeling of upward movement by the blister of metal and a violent confrontation underway. 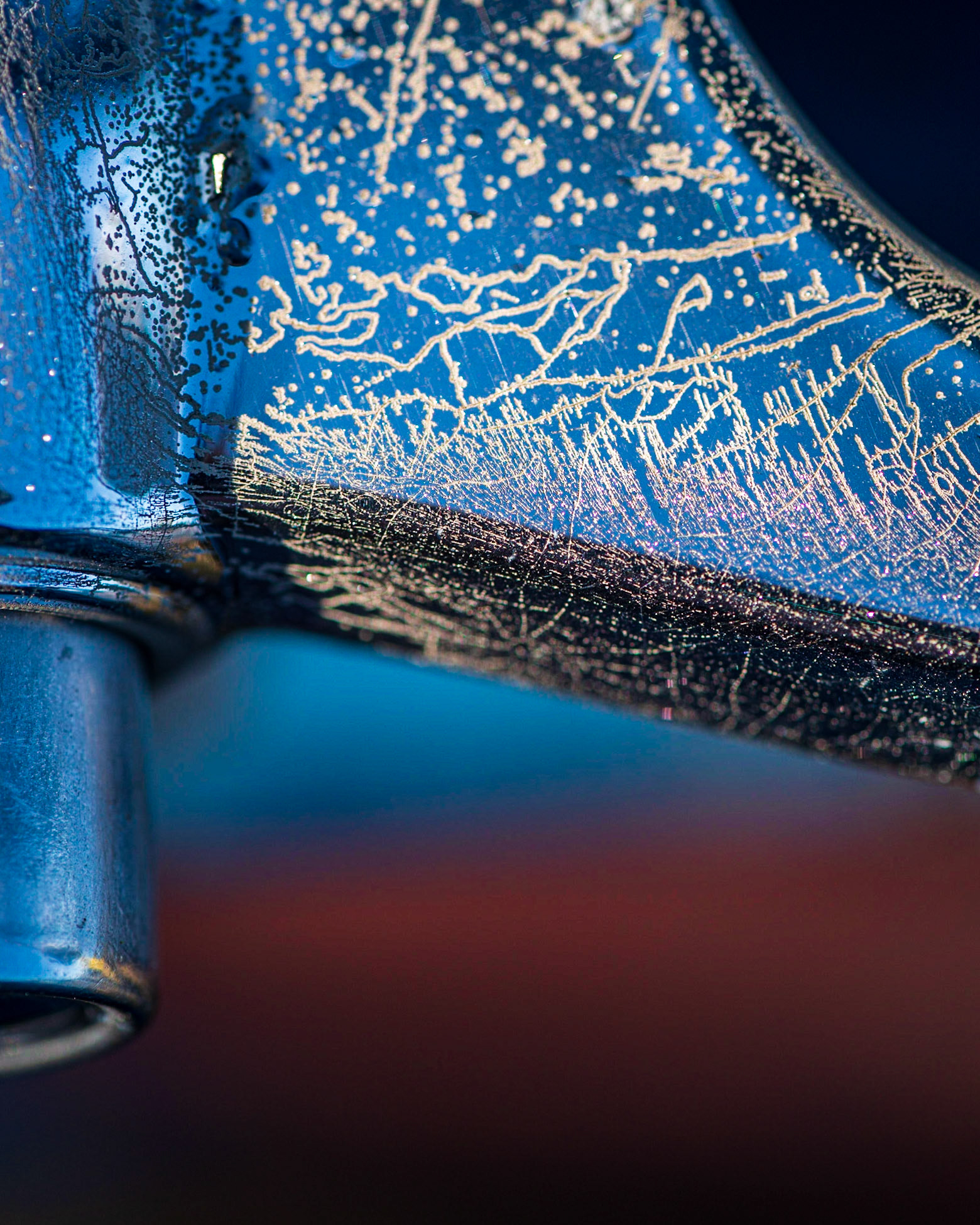 I saw the wonderful texture in the car handle and explored several compositions. I think the band of red at the bottom that reflects into some of the texture adds some extra interest. 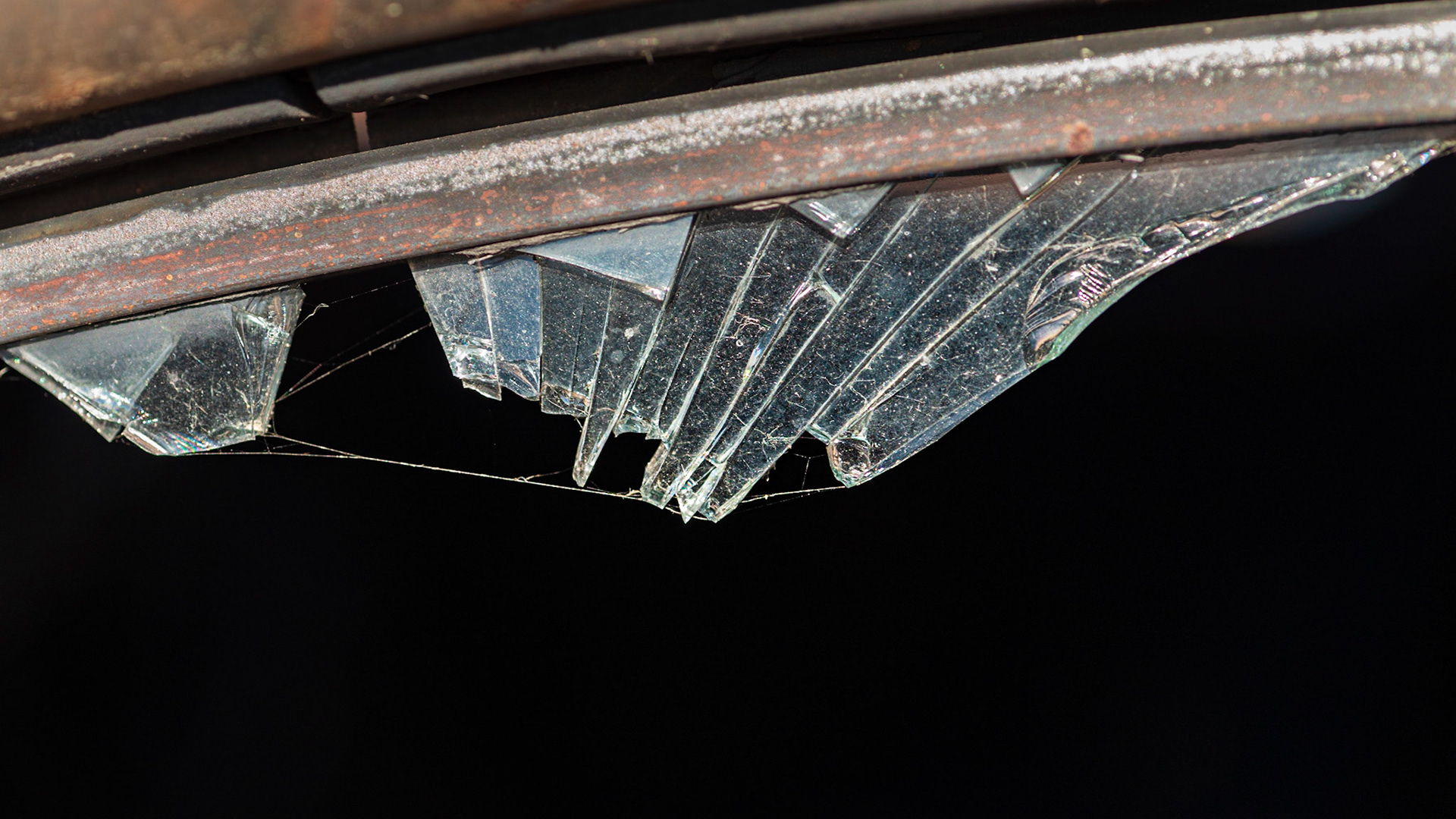 Crystalline fragments of glass radiating from an arc of metal, with some strands of a spider web to add a natural element for contrast. I angled the camera so I had a dark background. 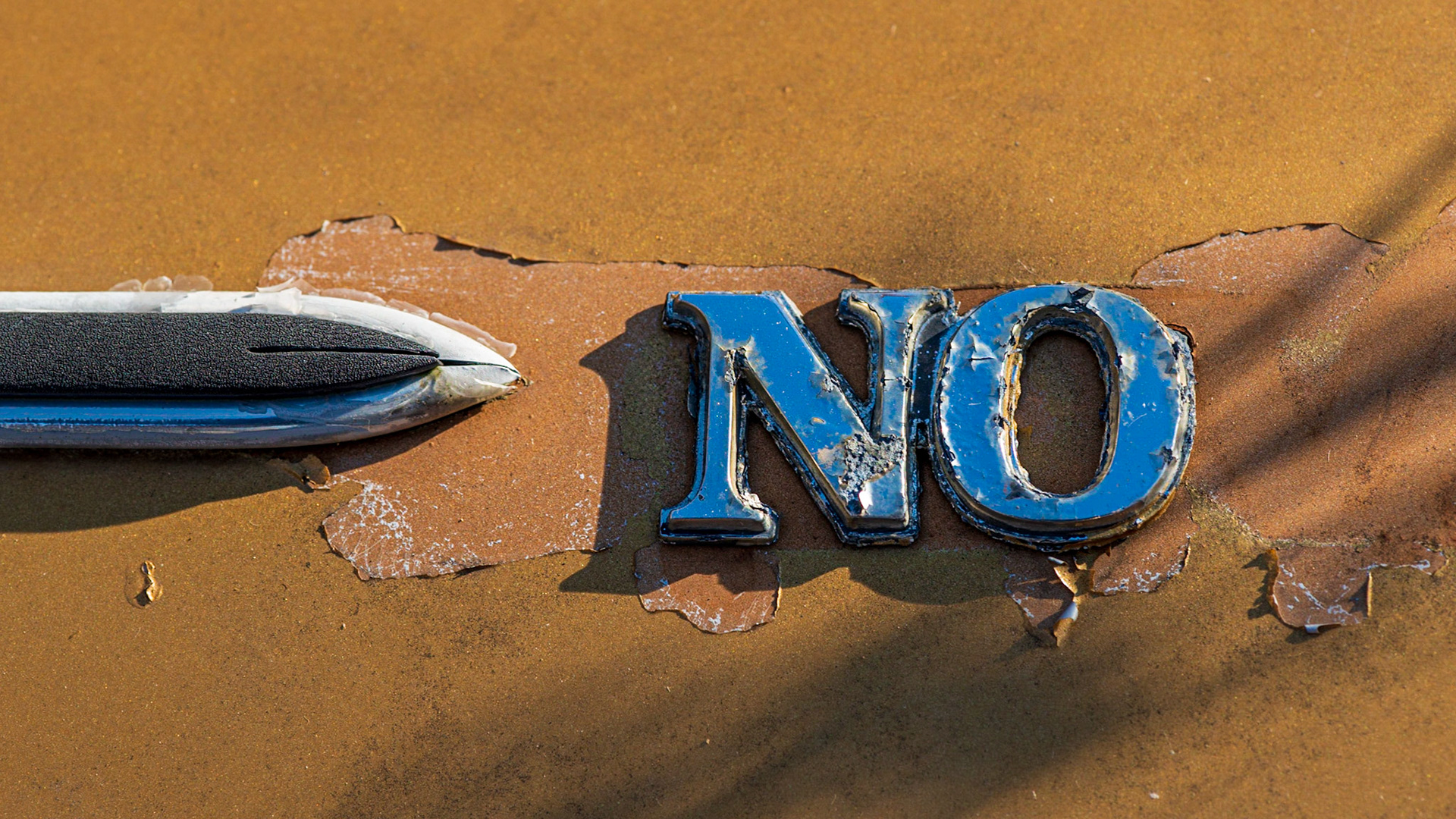 Words powerfully draw the eye, and here I have a blue/orange contrast to help, and if that wasn’t enough, I’ve also included the pointing section of trim. Perhaps the car laments it’s new home in the junkyard? 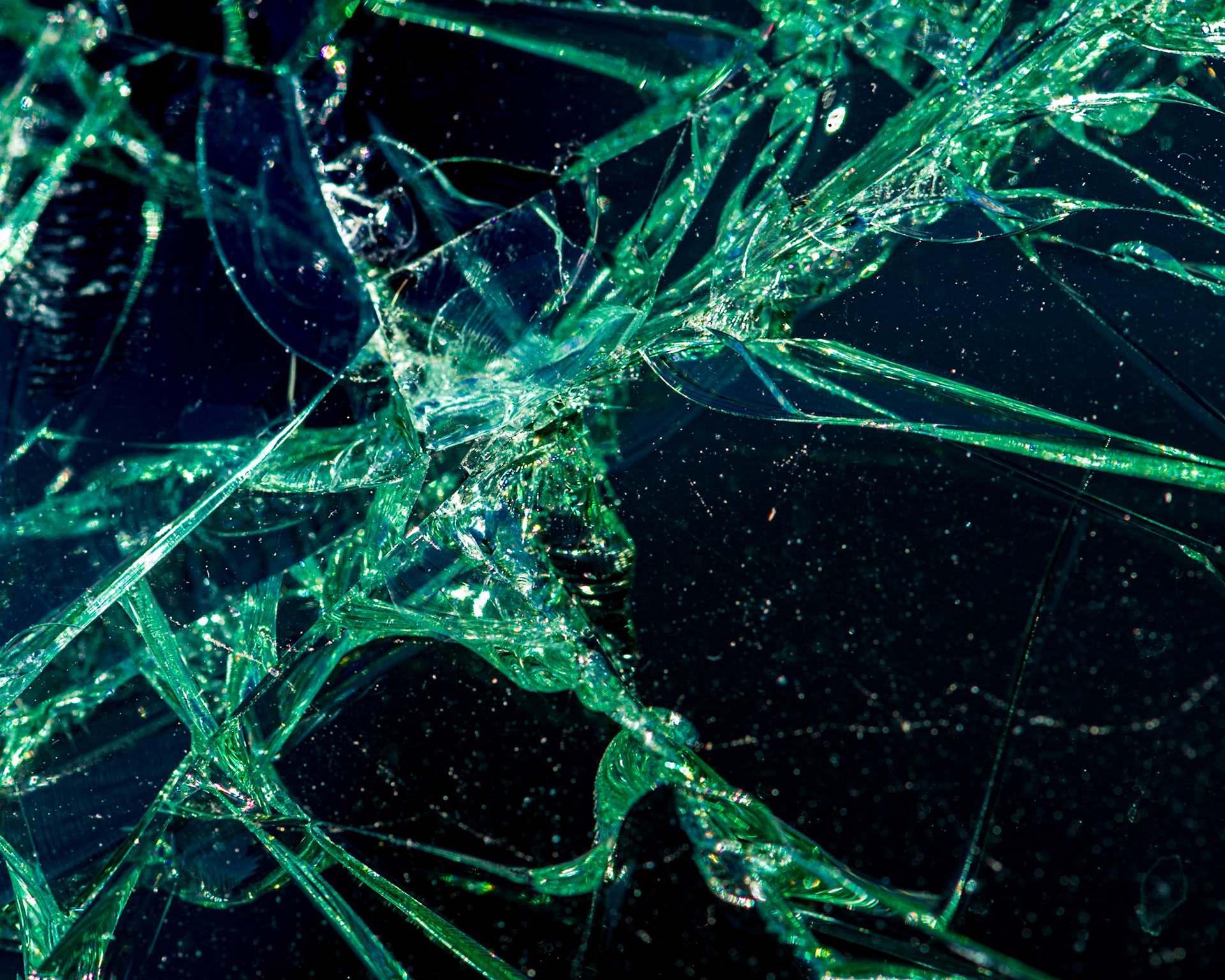 I had so much fun photographing broken glass! Here the sun illuminates an interesting diagonal shape set against the dark interior of the car. 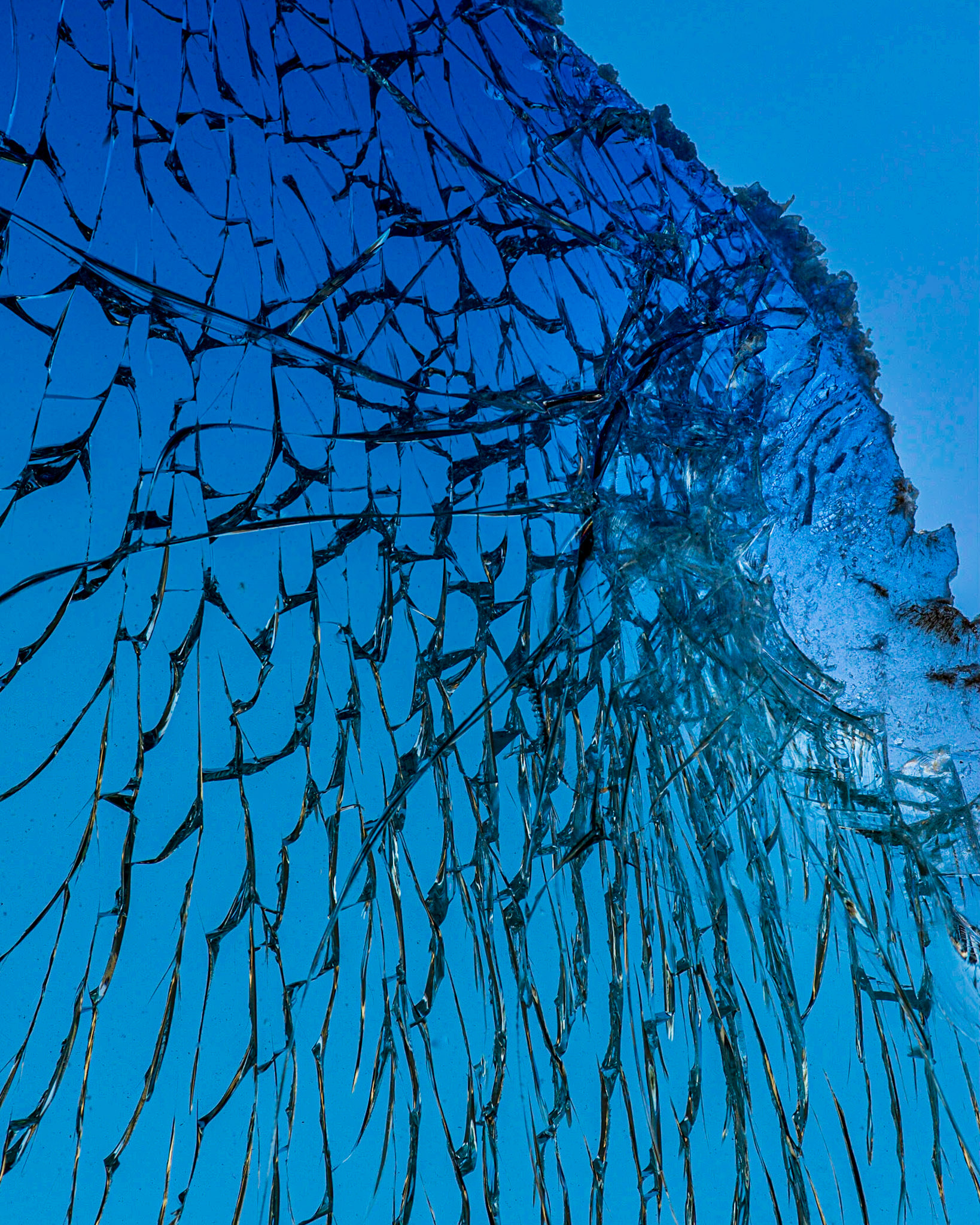 This again is a broken windshield, forming lines radiating from a semi-circular area on the edge. In this case, I could not see the shot, and several tries were needed, since the camera was pointed upward to the blue sky. 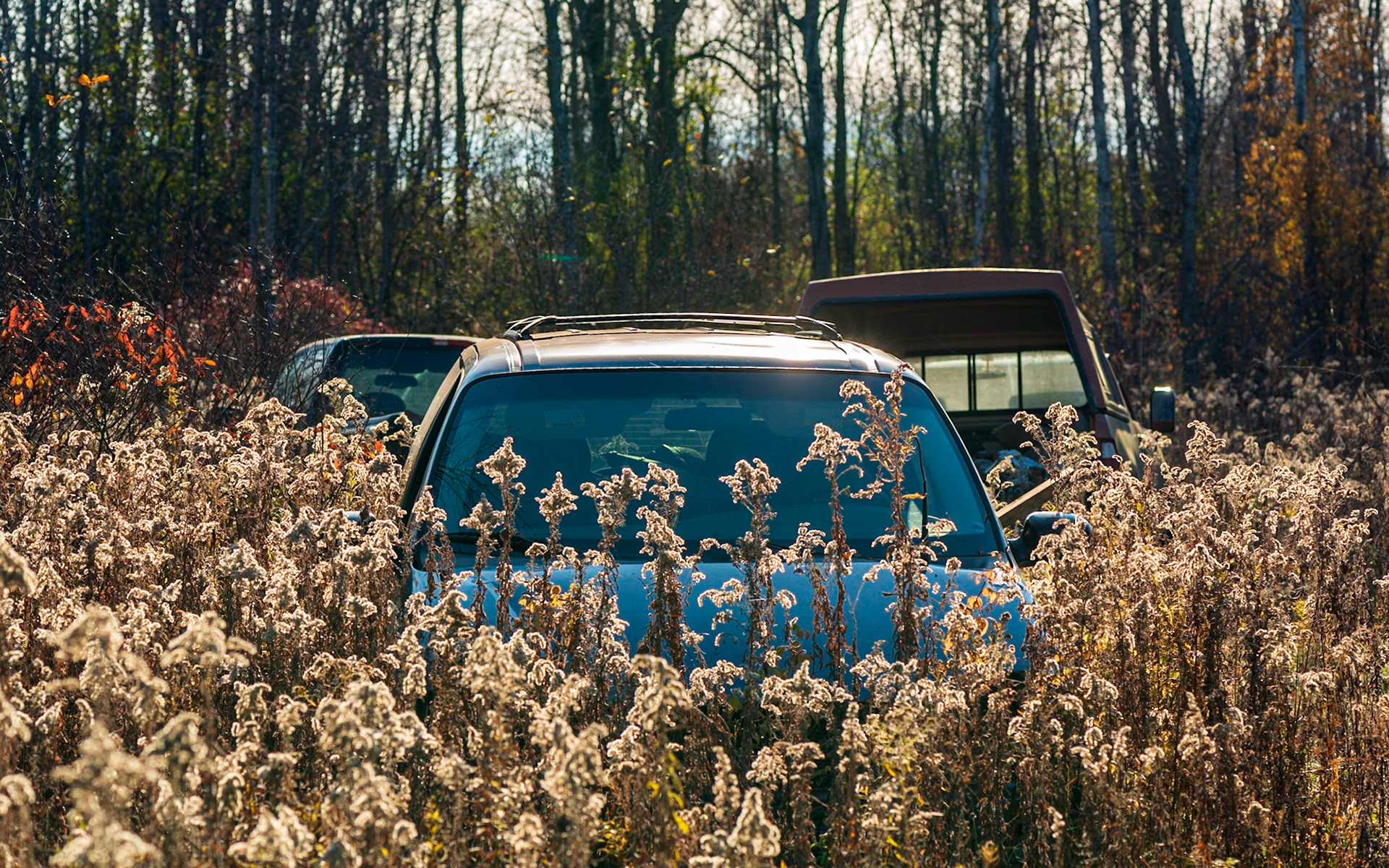 This shot was taken late in the day with wonderful backlighting illuminating the overgrown foliage. I took many such shots but particularly like the contrast of the blue car amongst the golden plants in this shot. 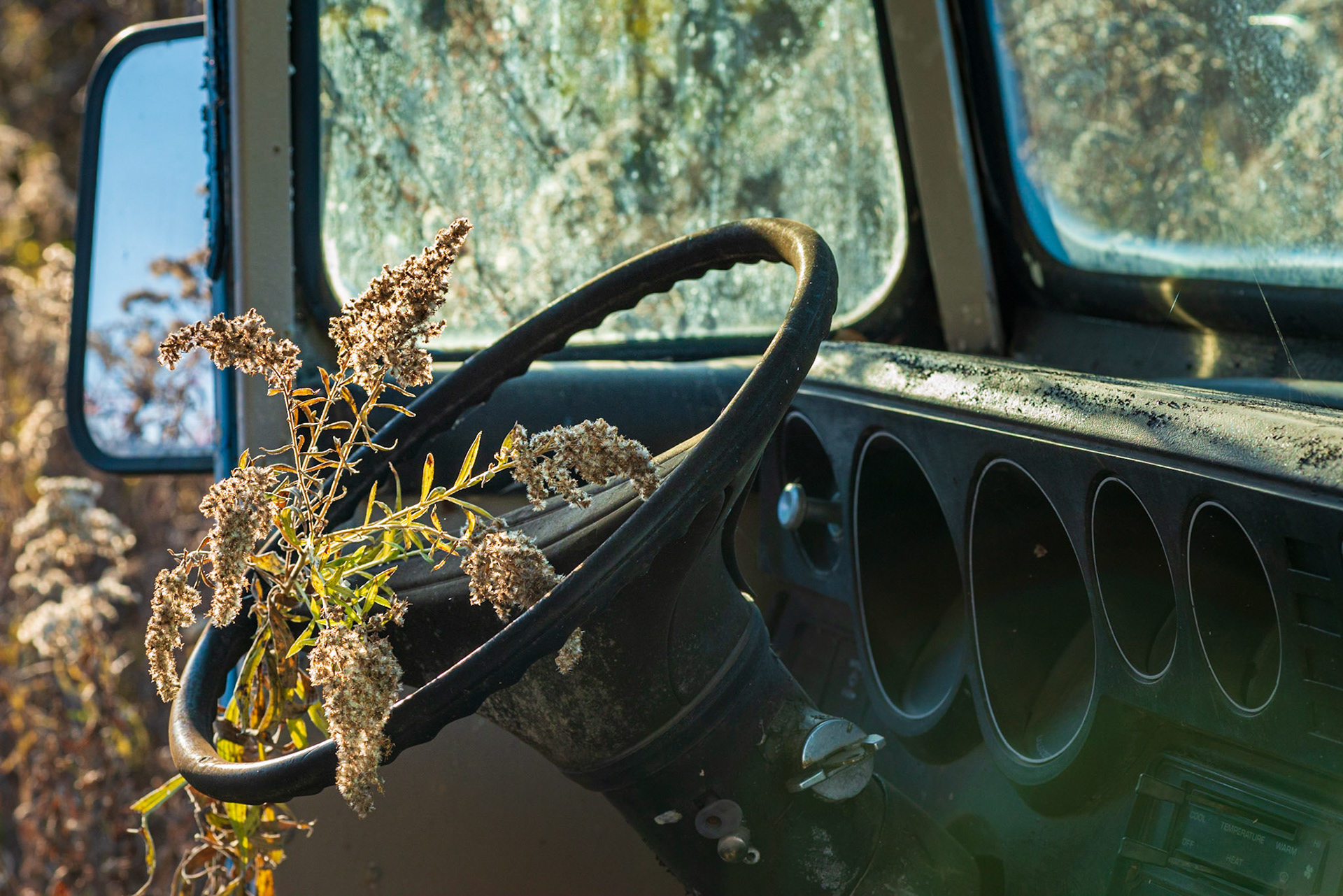 This shot speaks to the work of nature to reclaim that which is human made and offers a juxtaposition of the natural and unnatural. The repetition of ovals coming from the right also lead the eye to the plant and help the shot. 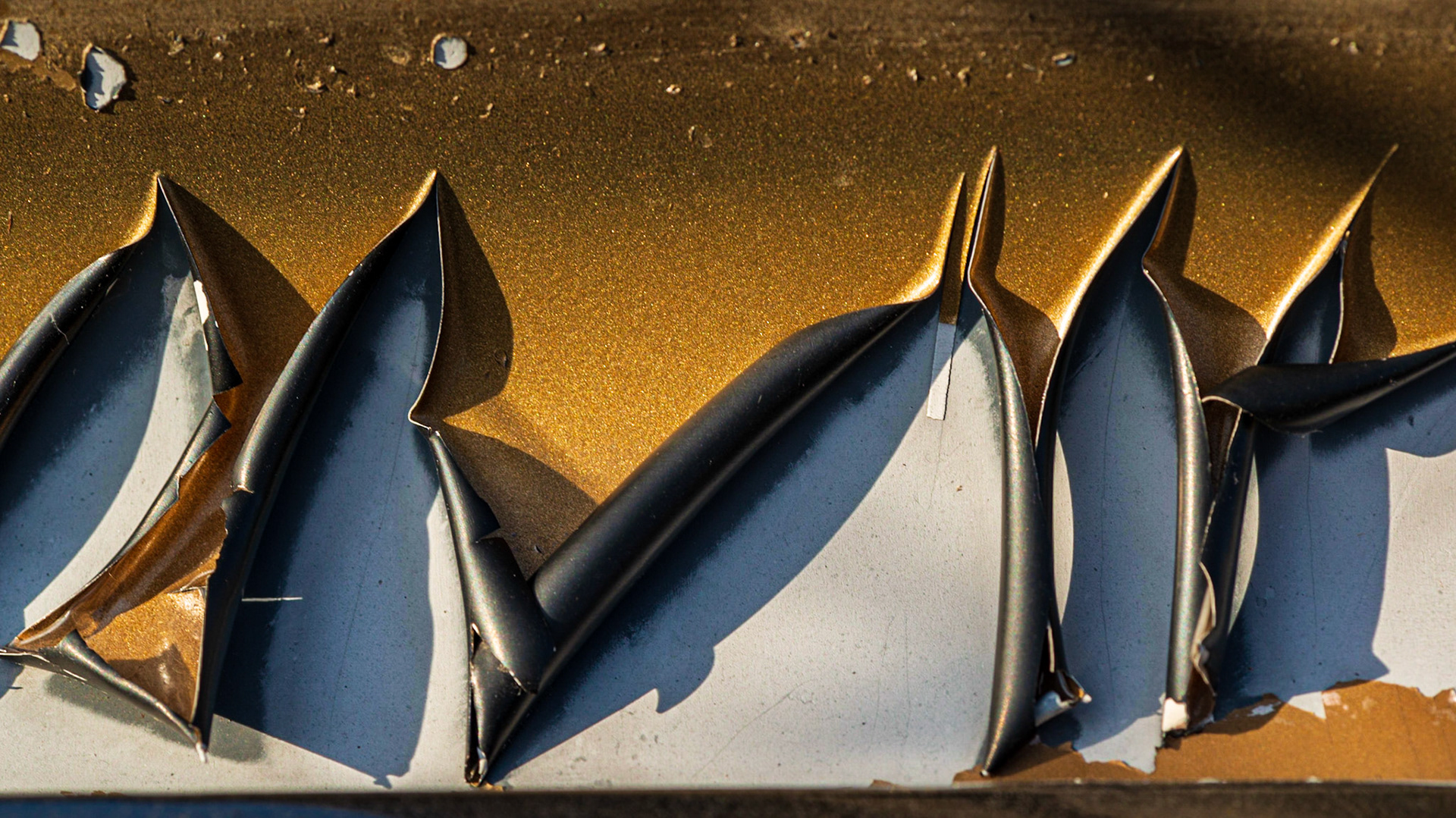 I was very excited when I found this blistered car bumper because it offered so many interesting shapes. My knee pads got a workout on this, and several other photo opportunities. 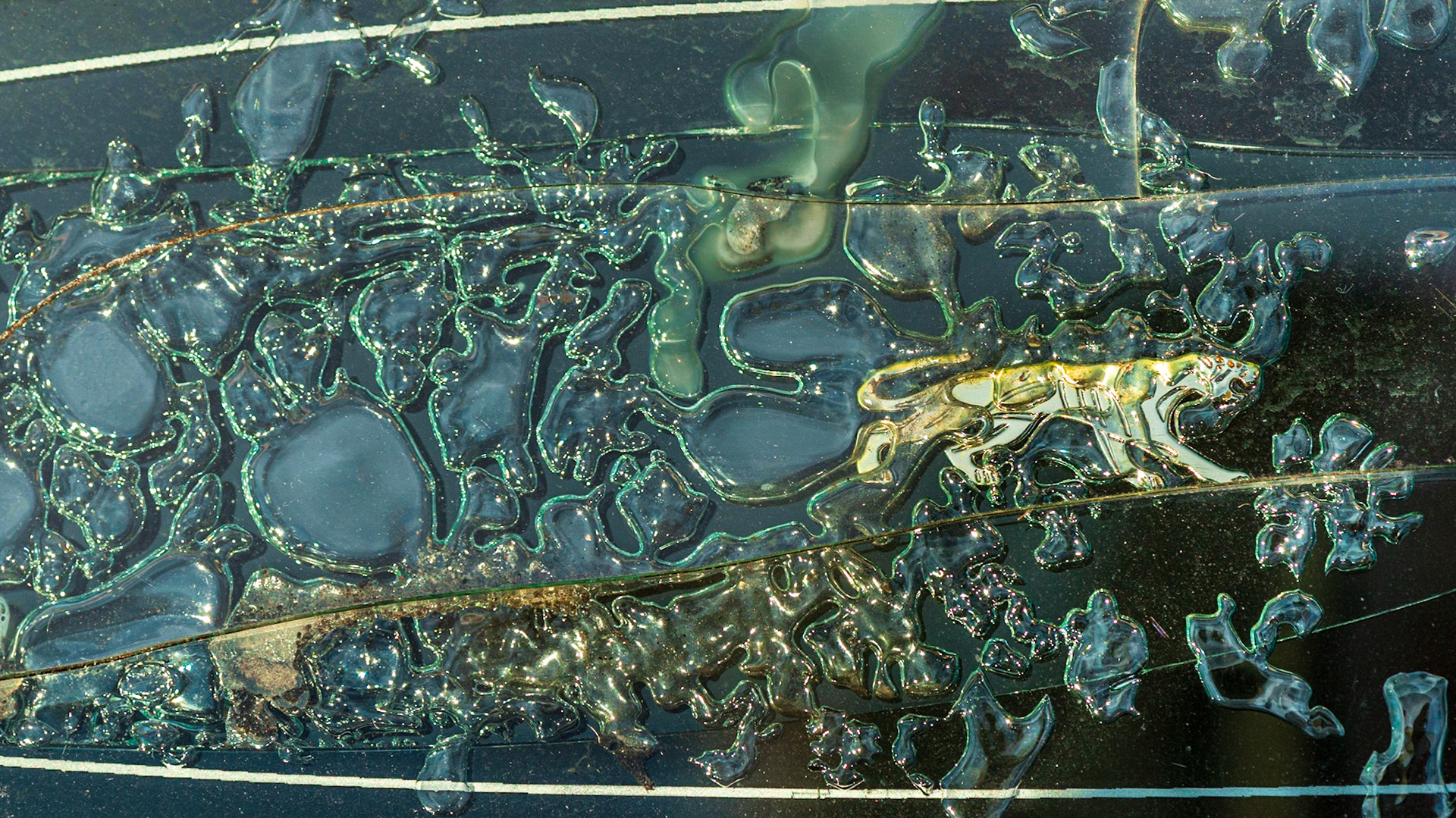 A detail on a side window. The cougar (I assume) seems to be walking along the crack to escape the cloud of blobs that are pursuing it. 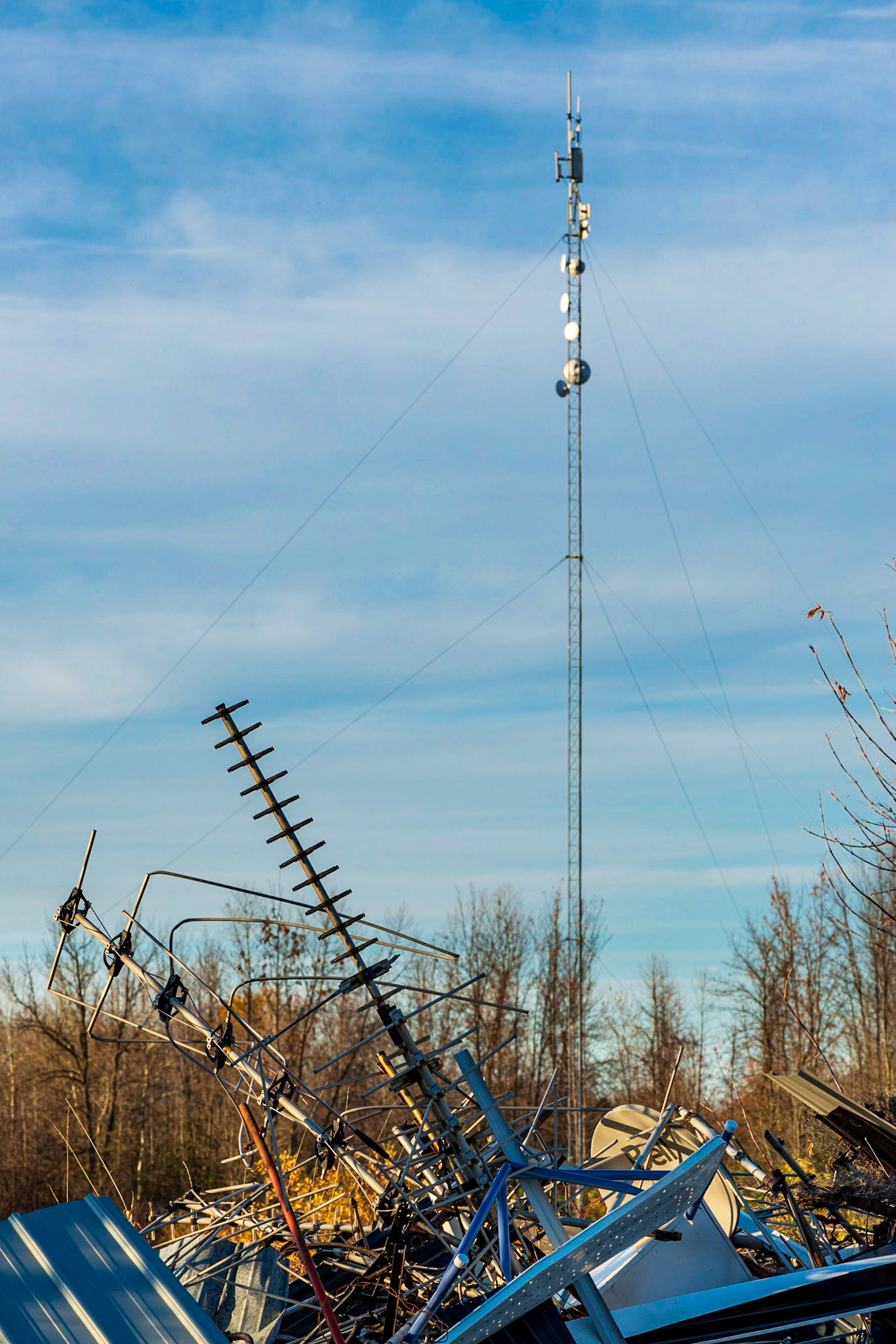 In addition to cars, there was a dump for miscellaneous metal. Here I’ve framed the functioning telecom tower in the background with antenna refuse in the foreground, as a new/old study. 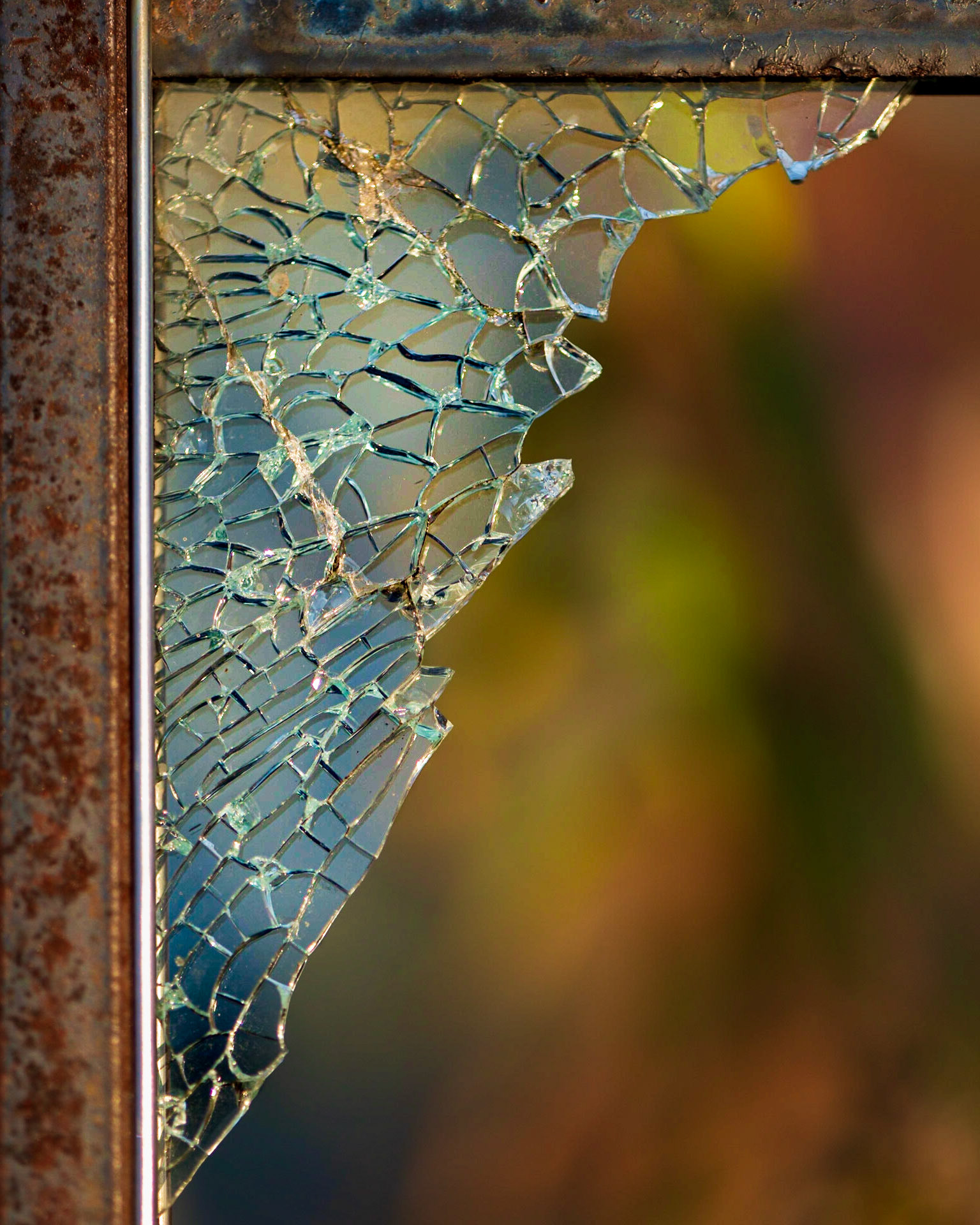 More broken glass (literally) framed with a colourful diffuse background. I enjoy the diagonal and the contrast of the sharp foreground and soft background. 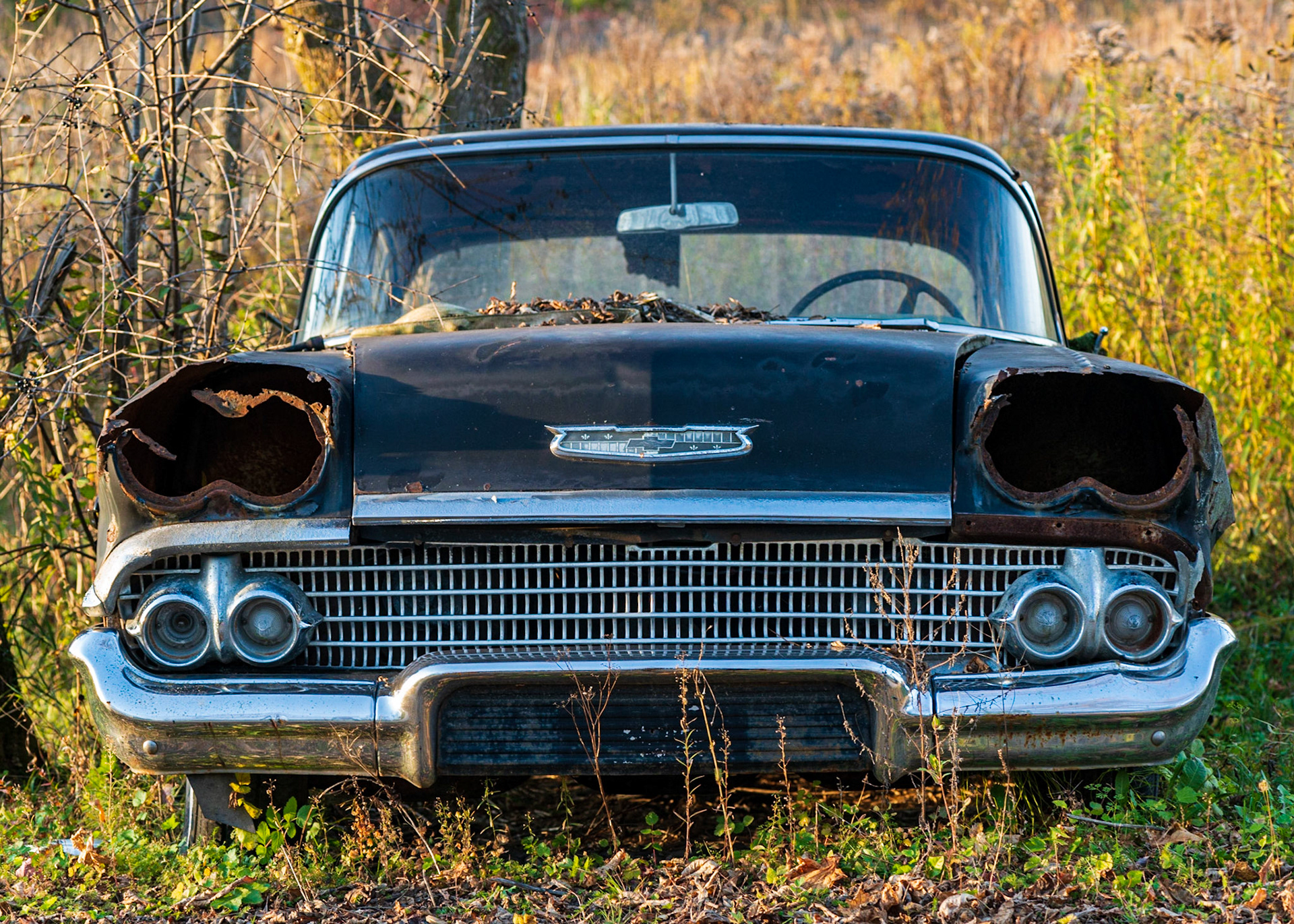 This old Chev was on the path leading to the junkyard and received attention from many photographers. I elected to use a tight, straight-on, framing to emphasize the strength of this once functioning car. 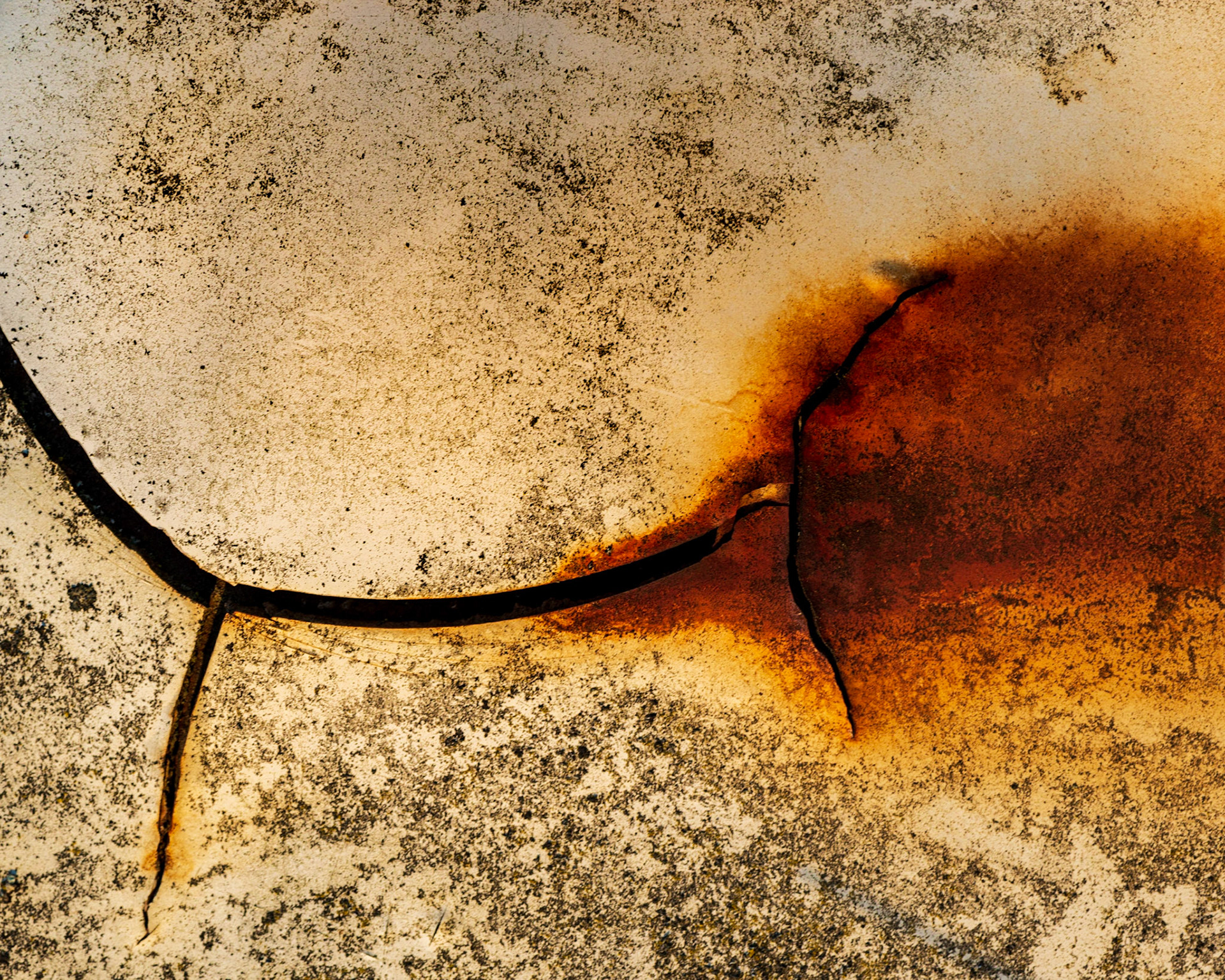 A crack leading to rust on the side of a dumpster. I find this rotated view more interesting and natural since most viewers are indoctrinated to look from left to right. 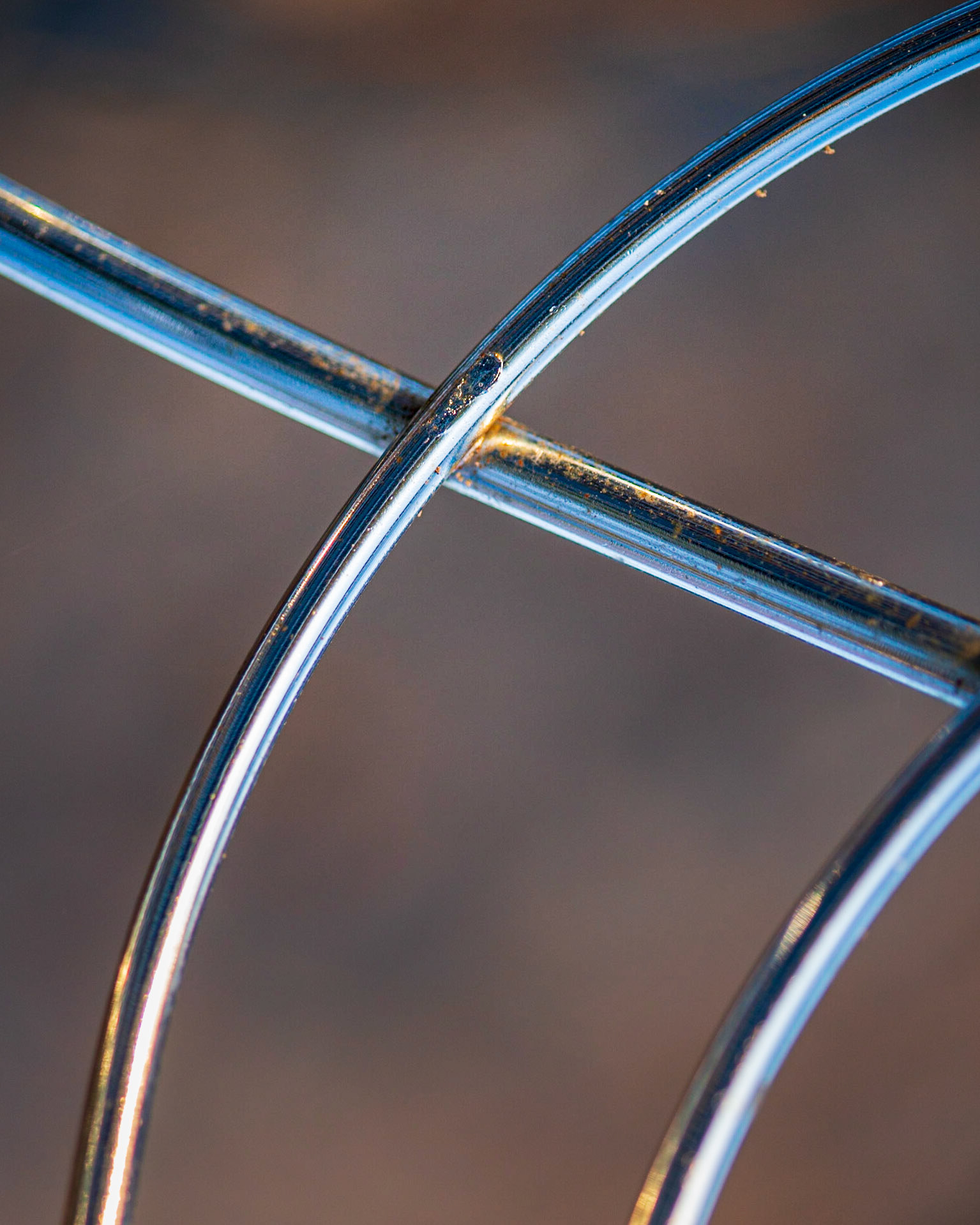 The metal frame of a chair. I took several shots of this chair since I felt it had lots of photographic potential. I used a narrow depth of field to blur the background and emphasize its graphic qualities.