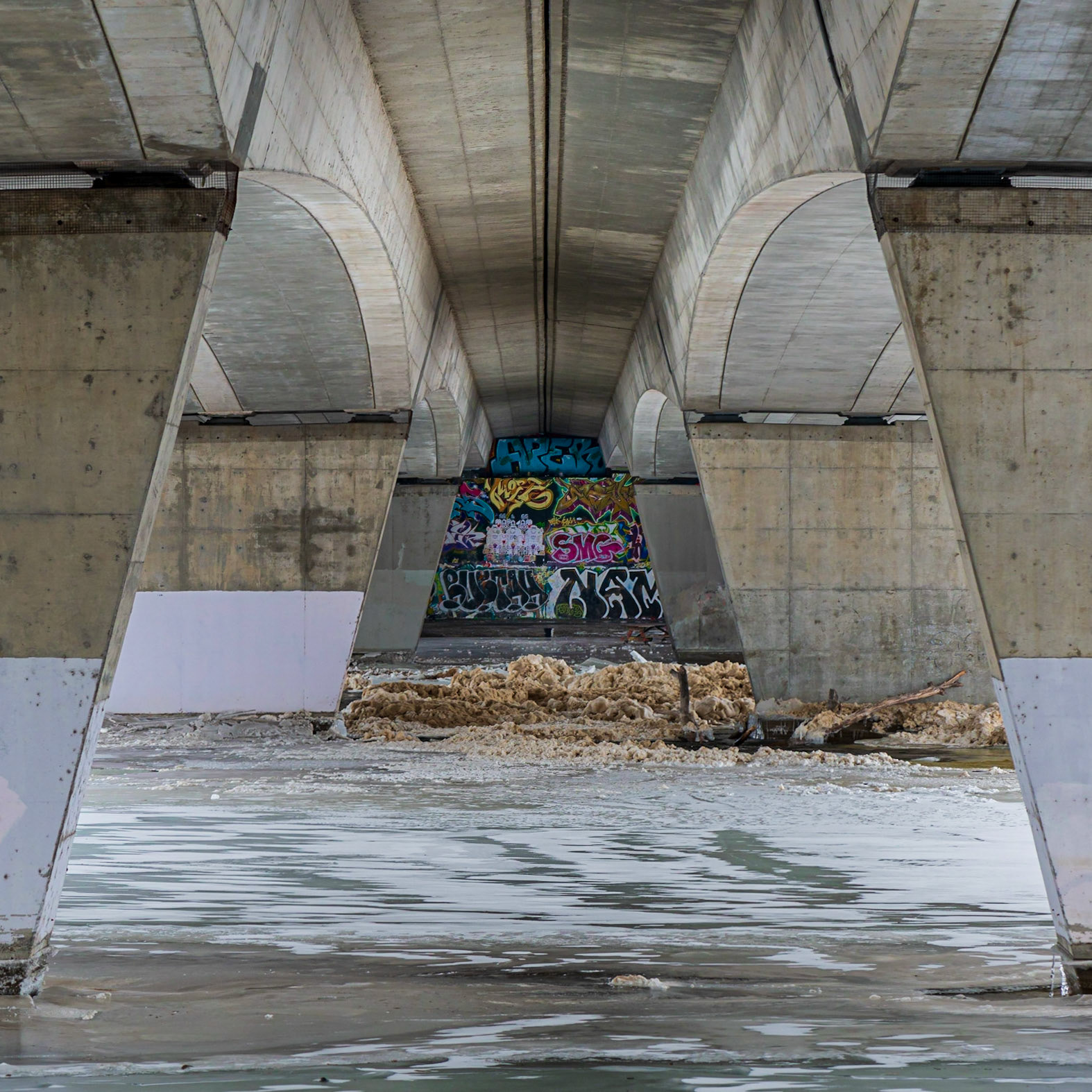 The view of the Rideau River under the Bronson Street bridge. I chose the camera position and cropping to emphasize the symmetry and frame the graffiti in the distance. The compression of distance by the 105 mm lens gives the eye a puzzle to figure out as well. 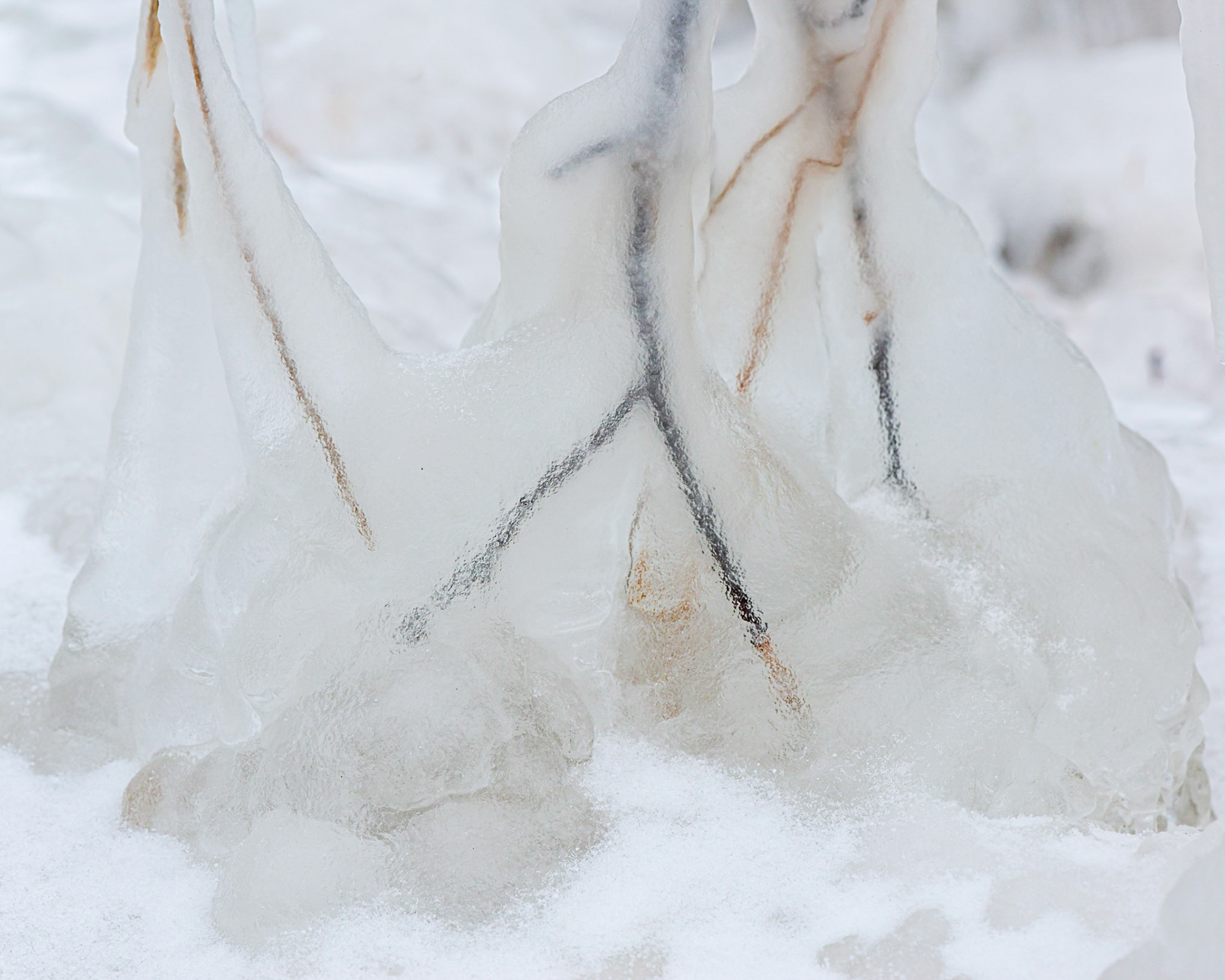 There were many examples of ice coated foliage along the river that I photographed. I particularly like this example for its simplicity and the arrangement of three ice mounds. 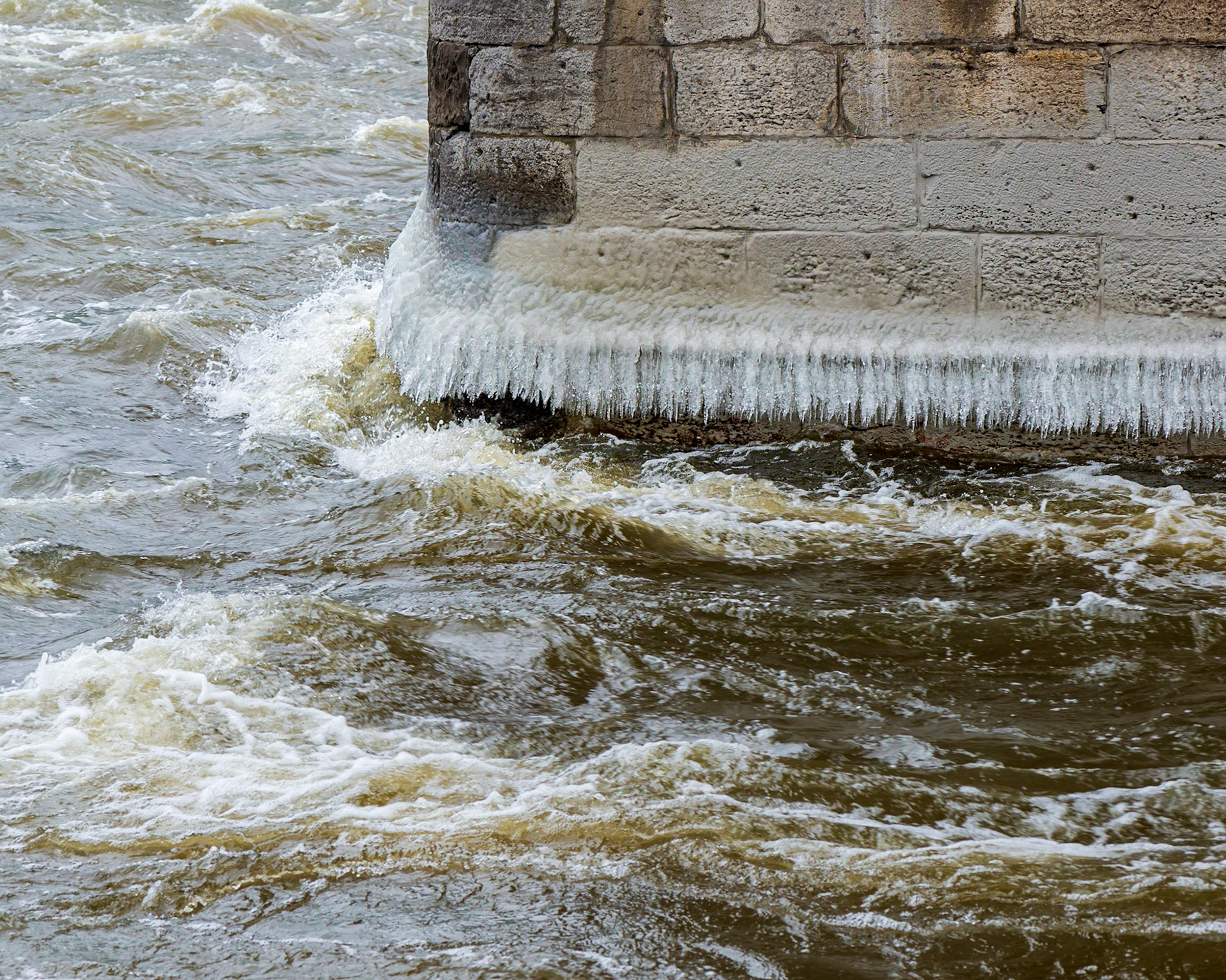 A pillar under the Heron Road bridge, with a skirt of icicles near the water line. I wanted to draw attention to the icicles and took several shots. I selected this shot because the two lines of turbulent water echo and reinforce the line of icicles. 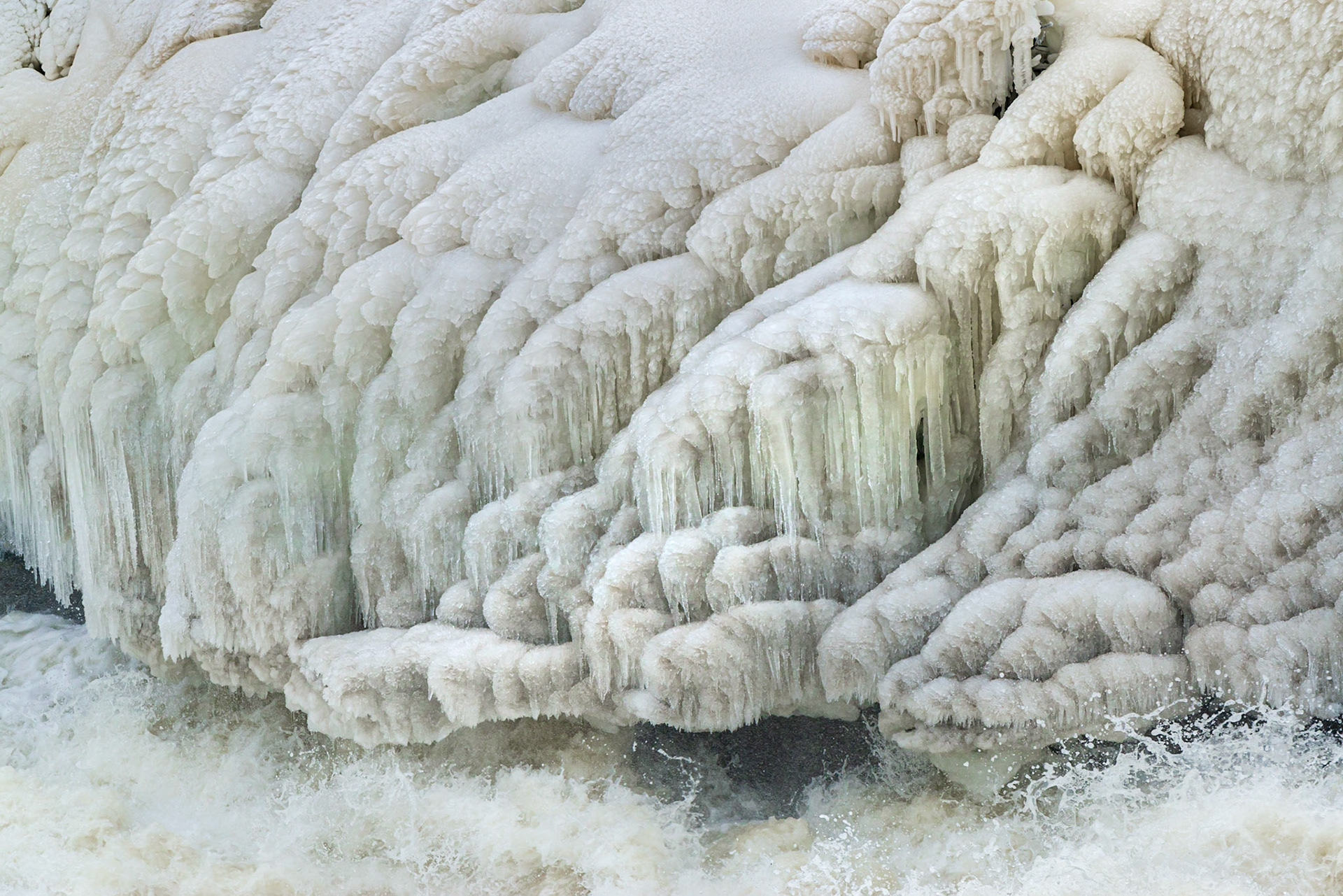 One of many ice formations at Hog’s Back Falls. In this case, I was attracted to the icicles just right of center, and to the many upwardly sloping diagonal lines in the ice. I included a small amount of water, and the splash in the corner, to provide context. 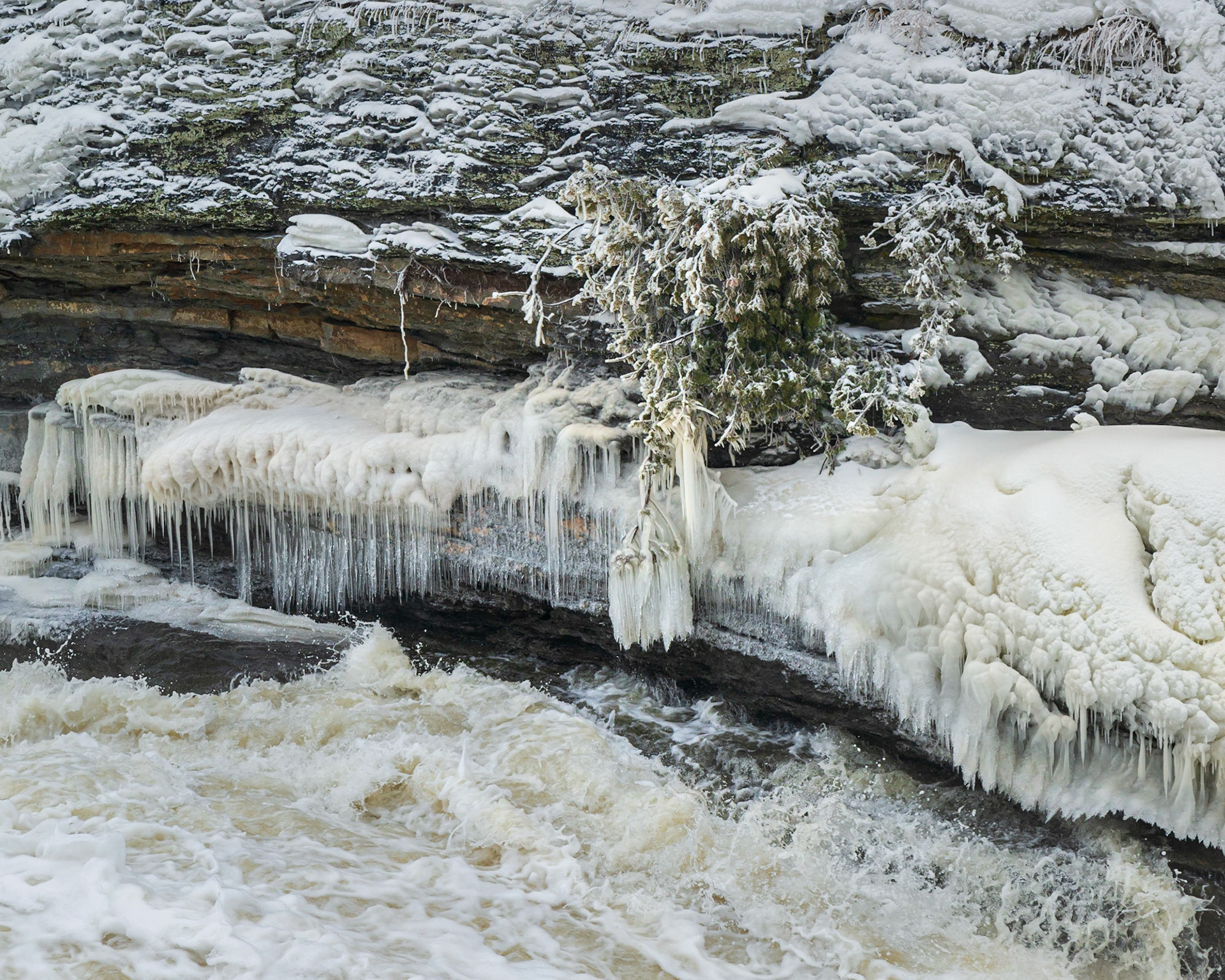 The plant precariously leaning over the water is the main subject here, with the left of center icicles perhaps serving as a secondary subject. These two subjects are mainly vertical, and in the background we have three mostly horizontal layers of foliage, ice, and water. 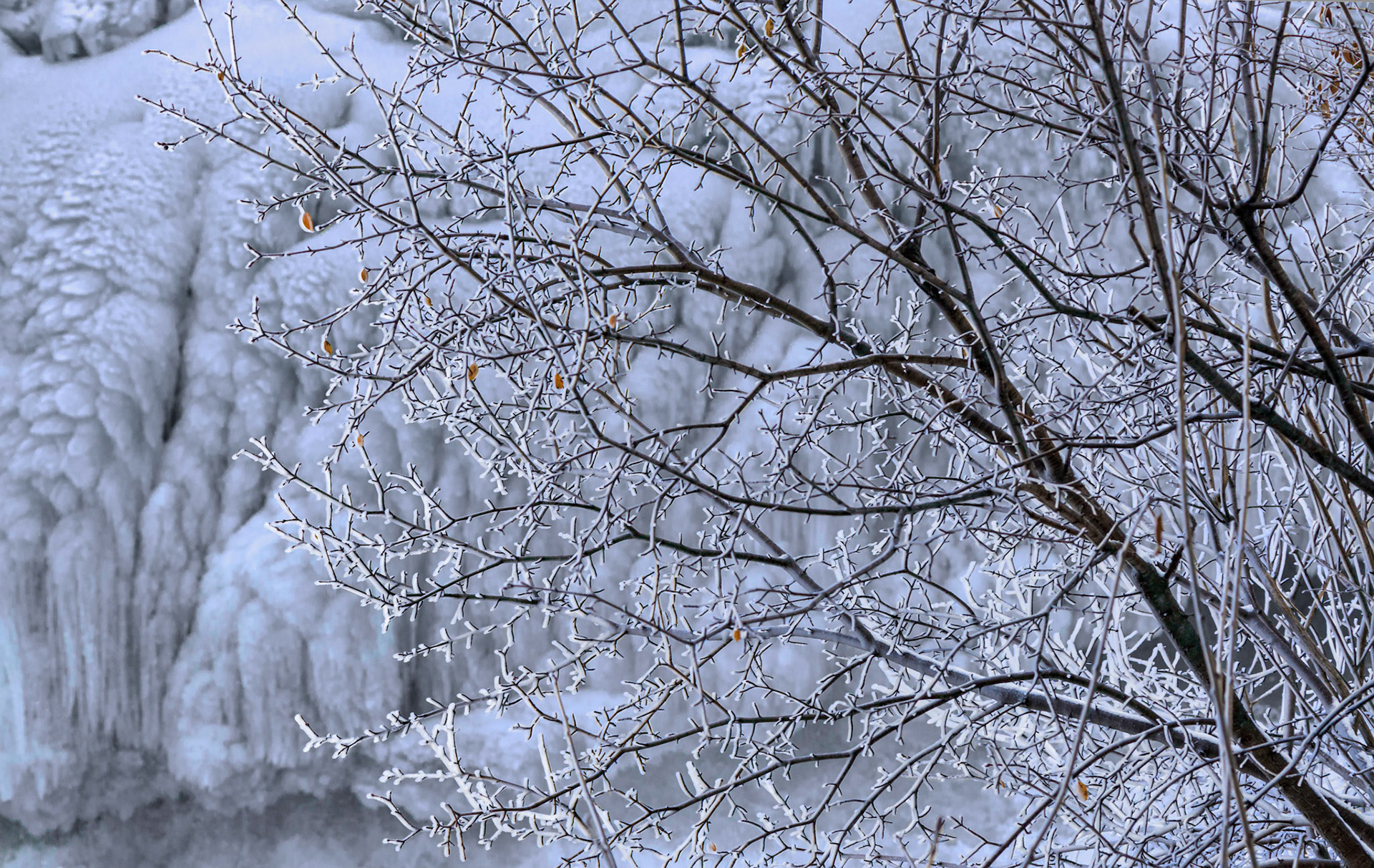 I was attracted to the backlit ice and snow on the tree branches. The original background was strongly yellow due to the silt in the water, but I’ve shifted it to a colder blue to evoke a sense of winter. 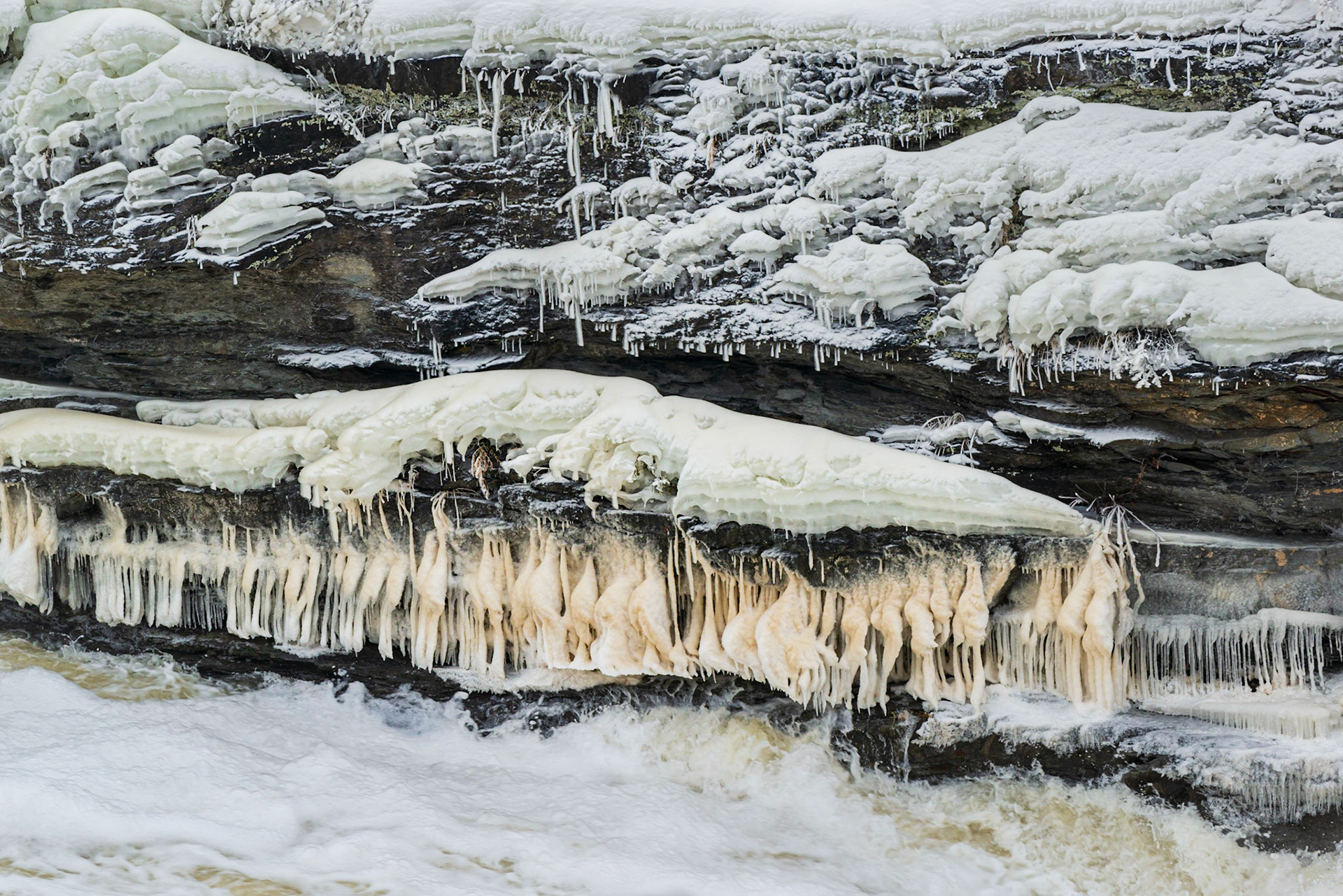 Perhaps it’s just me, but the horizontal line of orange ice formations reminds me of plucked chickens at the butcher shop. Anyway, that’s what drew me to the shot, and I’ve framed them with horizonal layers of ice above and water below. 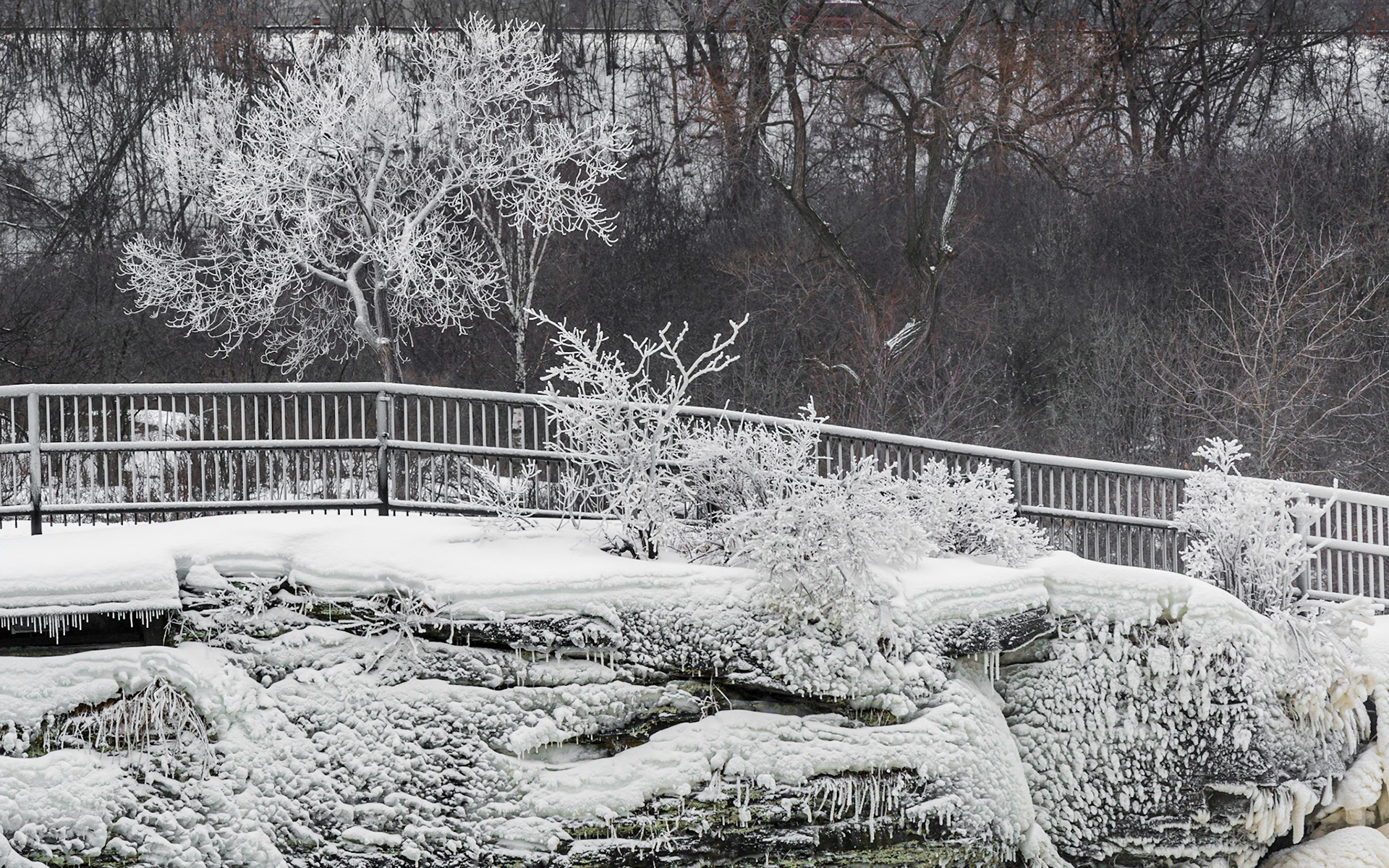 Shooting from a higher position would have eliminated the line of the parking lot at the top of the frame, but then I would have needed a ladder. Other than that, I love this shot. I even like the fence since it helps to connect the ice-covered trees and shrubs. 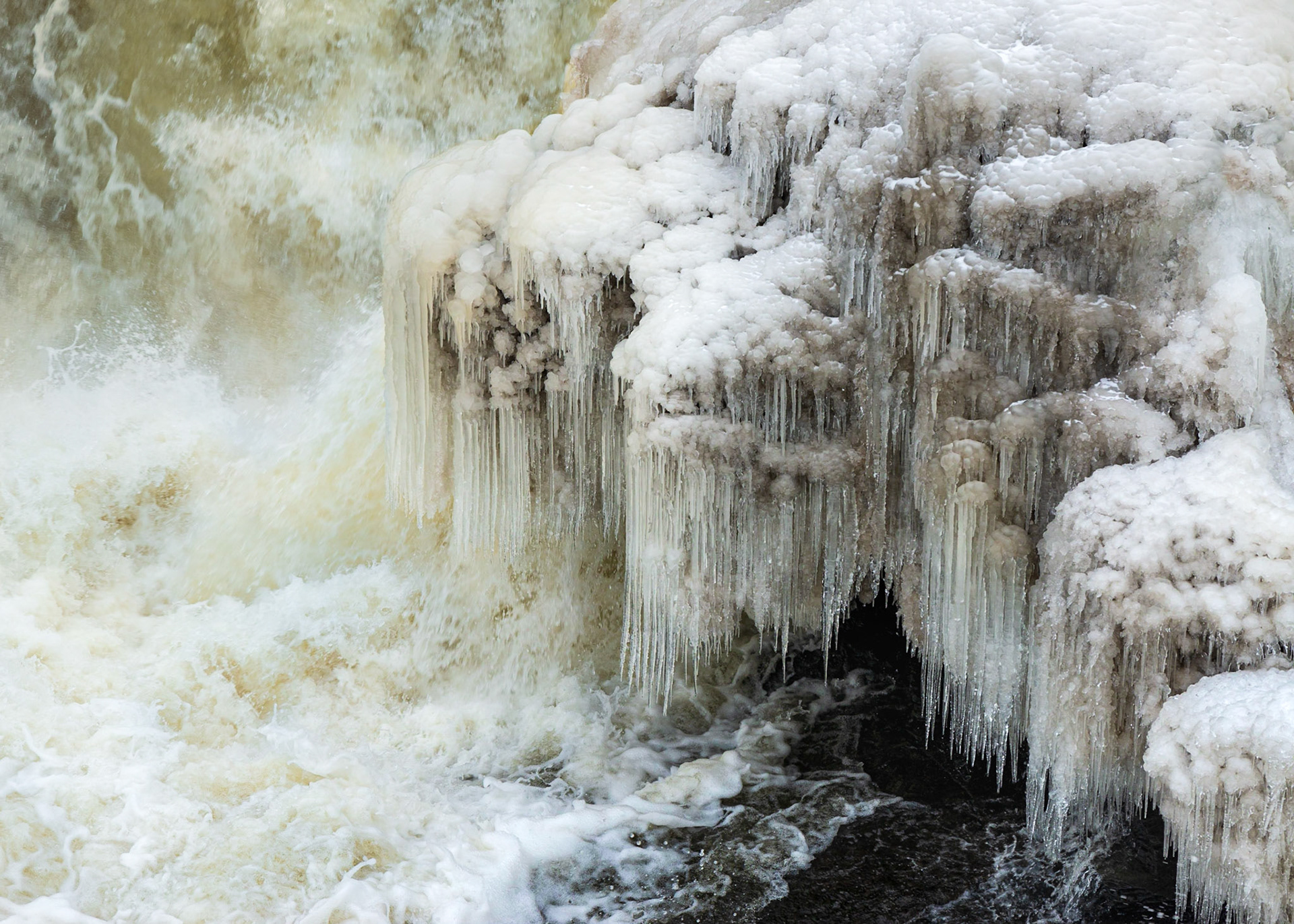 I took some shots to emphasize the power of the water coming over the falls and this is one. The main subject is the icicles in the context of the rushing water, and there is a nice diagonal from upper left to lower right, and a patch of calm water to contrast with the falls. 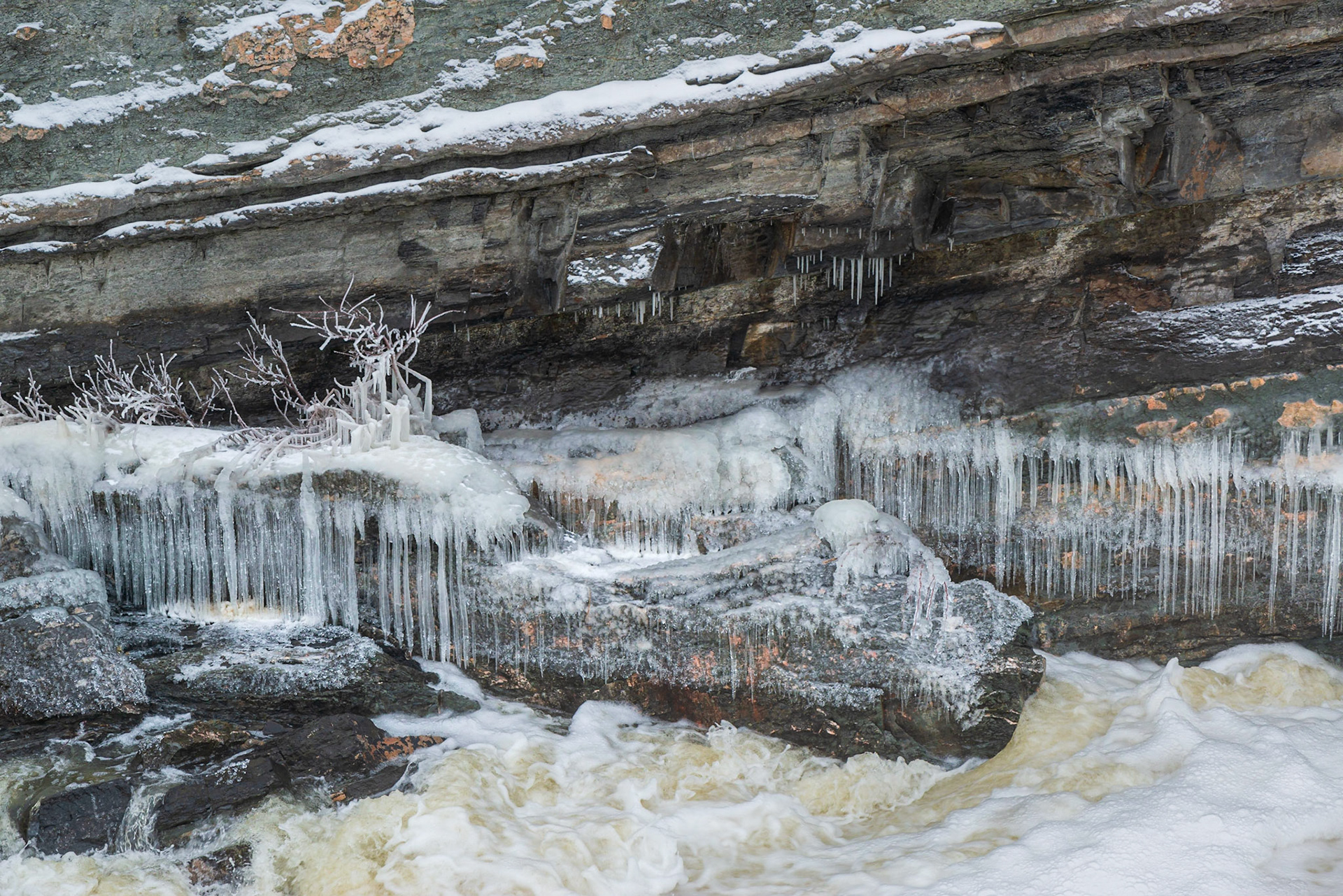 The diverging diagonal lines partition this shot into three or four contrasting regions. We have the unusual green coloured rock at the upper left, grey rock and ice in the center, and foamy water at the lower right. 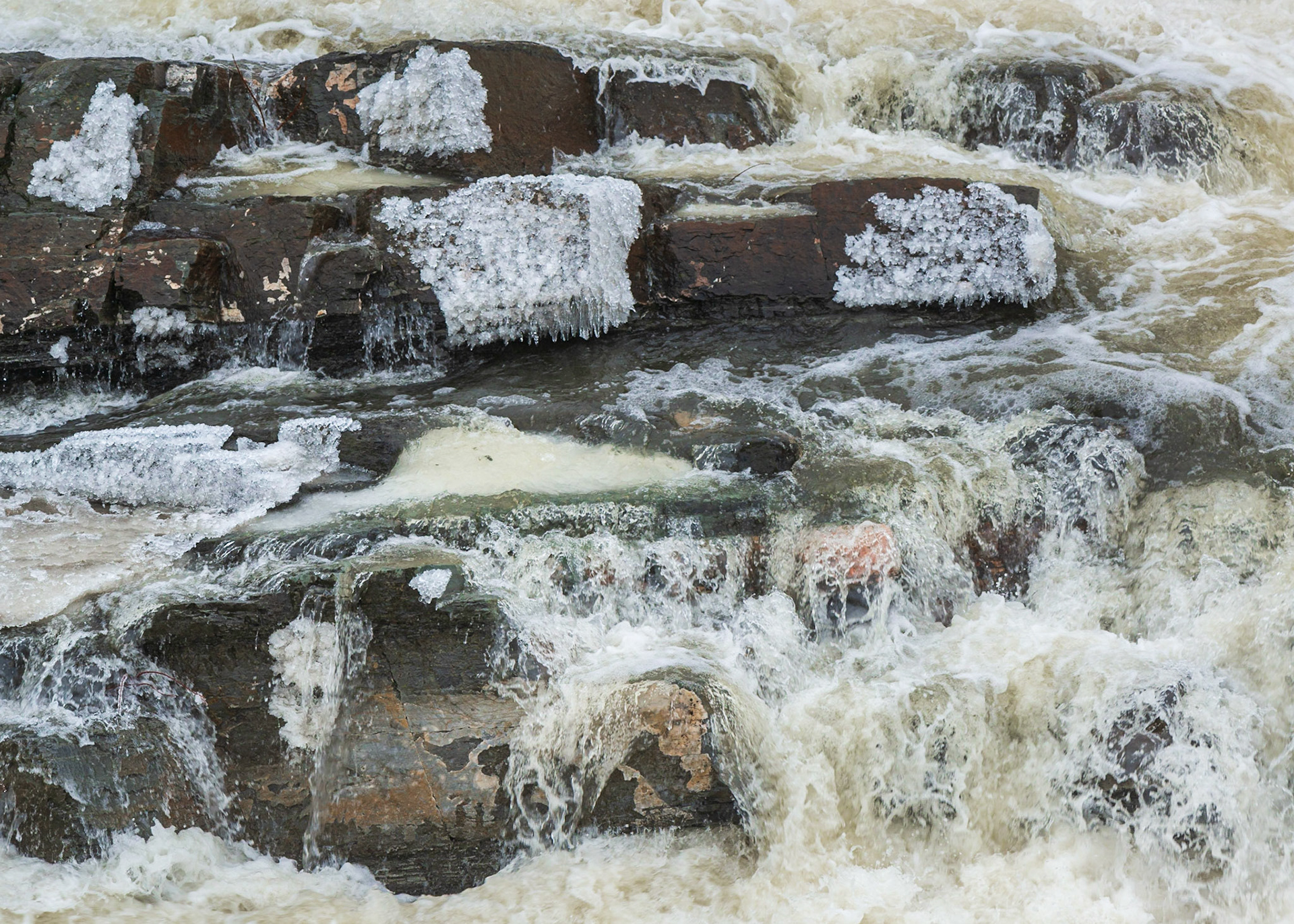 I find the spots of ice in the upper half and orange outcrops in the lower half quite interesting in this shot. There is also some green near the center. I tried to frame all of these in a pleasing way with a sliver of the water at the top and bottom. 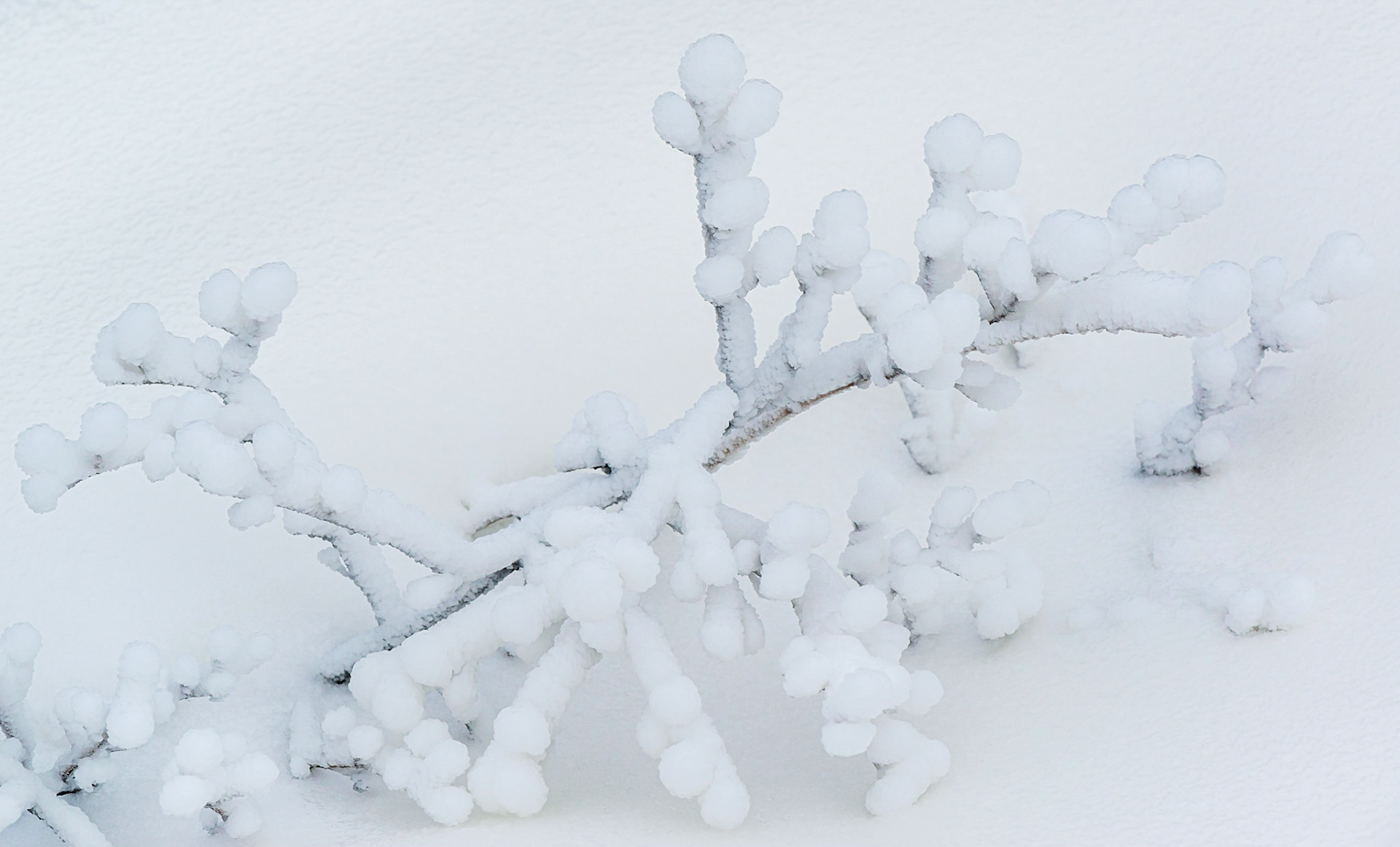 This is basically a study of (bluish) white on white. The small amount of visible branch offers an attractive diagonal, and there’s just enough tonal separation for the eye to easily distinguish the snow-covered plant from the background.